And don’t you boys go to the Clay Pit! You’ll Drown!

On late summer days, throughout tree-lined Trail Creek, mothers could be heard yelling this out back doors as a pack of sweaty boys ran down the street across neighboring lots. And of course, that’s exactly where they were headed.
The “Clay Pit” was a forbidden pleasure, but seems it was a boys-only club. None of the young men I grew up with ever shared those clay pit adventures with me until well into their 20’s. Guess they were still afraid I might tell their mamas!

Now the clay pit was said to be over 100 feet deep. Not even the best swimmer could find the bottom out in the middle of the roughly 2 acre pond.  And….wait for it – it was so deep that a giant crane had been swallowed up by it and rested at the bottom!

Knowing local history explains that crane’s watery death – if it is indeed true. Before 1924, the Town of Trail Creek was known as “Roeskeville” and contained a general store at the southeast corner of Johnson Road and Michigan Boulevard and the Roeske Schoolhouse at 3021 E.

Michigan Boulevard (replaced by Riley James Whitcomb School in 1928). The town was named after German-born brothers Christopher Roeske (1847-1912) and August Roeske (1839-1924) who founded the Roeske Brothers’ Company in the 1880s.

The brick mill was located on the south side of Michigan Boulevard (site of present-day MC Fish and Game Club), and the flouring mill was on the north side. Both the Risclay Brick Company and the Eureka Flouring Mill relied on Trail Creek for their operations. Raw clay was harvested for brick manufacturing near the creek and then was dammed about 100 feet south of Michigan Boulevard in order to create the Roeske Mill Pond to power the flour mill. The Roeske Brothers’ operations ceased in 1924 upon the death of August Roeske and Roeskeville was incorporated as the Town of Trail Creek.

It was said the brick mill workers could dig down 100 feet before water began seeping in, requiring it to be pumped out to continue operations. Rumor has it that one day mill workers dug too deep and couldn’t pump out water fast enough, resulting in that crane being part of our local lore.

For more information about the Roeske family and their businesses click the link below for an excellent article written by Barbara Stodola in The Beacher, based on research done by Trail Creek resident Bill Breining. 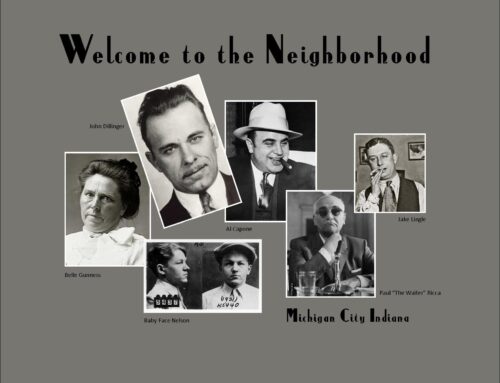